Whilst the Kickstarter was going on, someone asked if there were some adventures available for MSPE.
Well, there are a few (have a look at the link for Danger International and Justice Inc. here under).
But mostly, I have used scenarios written for other games.
MSPE being a quite simple system, you generally just have to make some stats to replace those of the NPCs in the adventures and you are ready.


Here is a first batch of publishers of scenarios I have used, and they have much more.
I have linked to pdf products if available, for ease of access.

Gangbusters and Weird Tales
Daring Tales of Adventure
D6 Indiana Jones You'll have to hunt them on Ebay or Amazon or any other place on the web, but those adventures are worth it.
Thrilling Tales
Call of Cthulhu
WWII Operation Whitebox
Battleforce Bravo Adventure Pack #1
GURPS WWII
Achtung Cthulhu
Medieval Mysteries, Sleuthing in the Middle Ages
Twilight 2000 whilst the setting seemed outdated a few years ago, we played some very brutal games at the time with heavy casualties. We just changed the rational for the advent of the apocalypse.
Classified I have not played them yet, but the scenarios seem interesting...
Modus Operandi site about espionnage RPGs (including MSPE); You'll find informations about Spycraft, Top Secret and Top Secret SI which have produced lots of scenarios that can still be found at reasonable prices.
White Lies
Covert - Ops
Posted by Bhoritz at 02:13 1 comment: Links to this post 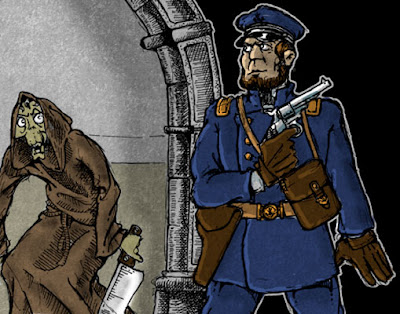 I have been using lots of scenarios with the MSPE rules.

And some of the most enjoyable have been scenarios written for the Call of Cthulhu game, in any of its settings (CoC, Achtung Cthulhu, By Gaslight, etc...).

Once you have made some stats for MSPE, you can play those scenarios directly, but there is a component from CoC that is missing: the sanity rules.

I have found a very interesting post, written by Sands on the Yog-Sothoth forum, with alternatives rules for sanity in Call of Cthulhu.

Those rules are what I wanted for my games, so, I translated them in MSPE terms. Every time I have used them, they have delivered what I wanted in my games, with the deteriorating Sanity of a character having effects on the severity of the symptoms. And the stress of the players following the same increase.

I asked Sands and he agreed on my posting of the MSPE version of his original CoC rules.

The title of Mercenaries, Spies & Private Eyes is, in a way, a misnomer.

It is a very good title, evocative, easy to remember, quite catchy, but it restricts the way some peoples view the rules field of use. MSPE is not a game about mercenaries, spies and private eyes.

If you just read the rules, you realize that they are contemporary, realistic/pulpish rules.
They include mercenaries, spies and private eyes, sure. And they include victorian, pulps or modern eras settings.
But it is only a small part of their range. It would be quite sad to restrict them to those themes.

I wanted to turn my presentation of MSPE into a youtube video to reach a public larger than die-hard roleplayers (or at least try).

Here it is, I only regret that I was not able to finish it for the start of the kickstarter.

Posted by Bhoritz at 11:08 2 comments: Links to this post

A fast stab in the guts - MSPE combat in archaic times 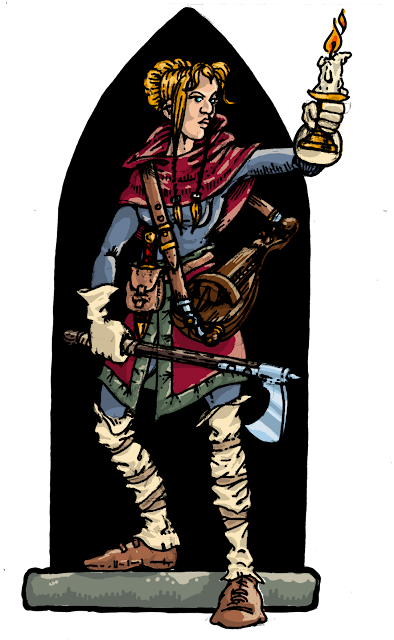 Basically MSPE uses T&T melee rules where each side generates a combat total. The heart of the system is the SR system for imaginative players and DM.
It needs a good DM with reasonable view of combat if the game is not to becomes a caricatural uber hollywoodian zany fest, but, when done right, it gives a very imaginative and open system.

Whilst this system is very efficient to resolve multi combattants fights in fantasy or pulpish situations, it is not what I use for whodunnits or high danger fights.
Indeed T&T fights tend to be long and attritional which is not what is needed, I think, when we are speaking about murders, or violent and quick confrontations.

Whodunnits are not dungeon expeditions and they generate few fights with few combattants, even sometimes just one culprit. And still, the climax could happen when a murderer is cornered or important moment can be played when one character is attacked by a lone killer. Those high tension moment should be both lethal and hazardous
Whilst using T&T style would work, specially if SR system is used well, I do still find it unsatisfactory because, it won't give the right kind of blow by blow feeling.

The first idea I had came from an interview from Ken in White Dwarf 32 where he suggested for peoples willing to have bow by blow fights to make SR (well, he was speaking about percentage, but you got my meaning) and apply damage from the success of the blow.

I thought about using gladiatorial rules published in Sorceror's Apprentice. But, whilst interesting for what they wanted to model, they were still not what I wanted.
So, I made my own, (very) broadly based on Harnmaster use of a result chart.

I used it a few times (because, I insist, not all settings or situations need this kind of treatment) and I must say that it really shined, particularly in a medieval whodunnit we played last year.

The system is quite easy to use, the aim being to have a more descriptive or flavorful fight (more quickly lethal also), not to unduly complicate the game.

The system is based on the following table and on SR rolls. 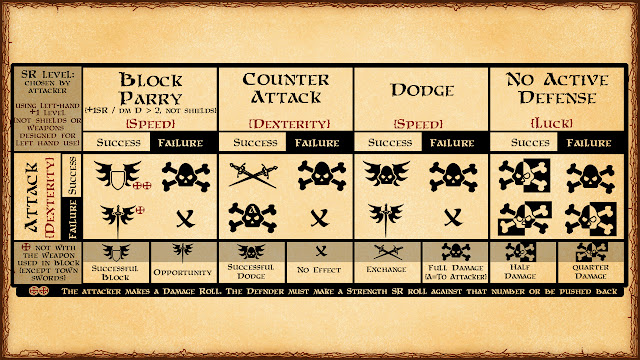 1- The players act in turn depending on their Speed
2- The attacker decides the base level of the SR he is going to take (representingthe difficulty of the maneuver he is attempting).
3- The defender chooses one of the different defences: (Parry/Block, Counterattack, Dodge, No Active Defense).
During the same turn, he is only allowed to use each choice (attack included) only once; meaning that multiple attacks from different attackers can leave him without defense at all and that a character can initiate attack only once.
4- Both attacker and defender make a SR roll (the base level is the same for both, but it can be modified(see later)), based on the characteristic associated with the maneuver (see table) plus Skill Level if any.
5- The GM the looks at the table, depending of the success/failure of both participants to determine the results.

Attack can only be attempted when it is a character turn to act and only if he didn't move more than half his move allowance.
The defense actions can only be used against melee attack, except for the DODGE which can be used against a thrown weapon, but only if the thrower is within the field of view of the target.
The SR level chosen by the attacker is a base, which can be modified  depending on the circumstances. Two modifiers I use are the following:
- if using the left hand (to attack, parry, block…), the character adds one level at his SR, for the added difficulty. This does not apply if the object has been designed for that use (a shield to block, a Main-Gauche to parry..).
- one SR level added for parrying or blocking a weapon for each full D of damage above the two first (for exemple a weapon doing 4D6+2 damage would add 2 to the SR lvel to be parried), this does not apply to shields
- and of course any circumstance that the GM deems worthy of a SR level increase…

After several attacks in the same round, the defender can be running out of options, he just takes damage without reaction, but then, he is probably taking on more that he can handle…

I wouldn't certainly advise to use it in every circumstances, it is certainly not needed as the normal rules work very well in most situations.
Settings that would benefit, are historical whodunnits and settings where swashbuckling would add to the setting atmosphere (three musketeers, prisoner of zenda, but also if you add laser sabre style fights to your pulp sf).

Posted by Bhoritz at 09:18 No comments: Links to this post 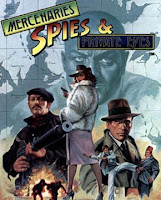 And  YES! MSPE is going to be re-edited as a kickstarter!

And not only that, but it is a real re-edition. not a new game under the same name.
The original rules are respected not changed.

There is going to be some added material (notably to play in futuristic settings - Blade Runner, here we come!), but in new chapters, expanding the original (which is fine), not mutilating it.

If you don't have any idea of what I am speaking about, I have made two posts describing the game in some details, they are here:

I have also a few other posts about it if you want some more info:

Don't miss this Kickstarter of one of the best roleplaying game of all times.

If MSPE gets some new life from this re-edition, I am very tempted to post some of the stuff I am using for my games (rules addons for specific settings or situations, cardboard figures and terrain, VTT tokens and battlemaps, scenario ideas, NPC generator program,...). We'll see how it turns out.