When playing online, I generally use Owlbear Rodeo VTT, Runehammer VTT or similar simples VTTs, using paper and pens for any information that I want to keep on hand. Some players seem to prefer to have their character sheet on the screen, so, I generally make some fillable character sheets that they can use alongside the program, in another tab.

I have recently backed the test drive rules of Dragonbane and they really look to be right up my alley in style and complexity (except maybe the rest rules, which are quite classical, but that's a discussion for another day and easily solved anyway).

So, I decided to make some charsheets, but contrary to my usual black background, I used graphic elements from the official character sheet, because I found them so gorgeous.

Here is how the result looks like. Read further to find the files for your own use (files provided with the authorisation from Free League, of course).

There are three ways to use those files:

- simply open the pdf file directly in your browser (I use Chrome) and fill it, noting any changes during play and saving the result at the end of the session.
- or, if you want to replace the illustration by the portrait of the character, you can open the odt file with LibreOffice or OpenOffice and modify the image before exporting the pdf.
- and, finally, if you want to display an illustration set inside a border with the same style as those in the Dragonbane rules, you can prepare it with just a few clicks in GIMP or Photoshop.
Nothing complicated with those few steps to follow. Here is how to do that:

1- Simple PDF charsheets, without illustrations: open and use

2. Charsheets with character illustration, open the ODT file and export to PDF

From that image, you can see that there is a space for an illustration of the character, which means that there is an image field in the odt form (obviously).

To fill that image field with an image of your choice (more or less square images are going to work best), open the odt file: - odt file of the charsheet in Libre Office -

Check that you are not in design mode (Form Menu > Design Mode): 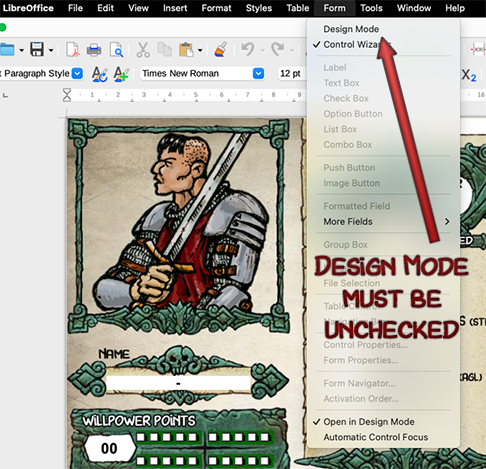 Double click on the illustration field and choose an illustration, ideally more or less square (to avoid empty space padding the image, but it will work with any proportions of image). 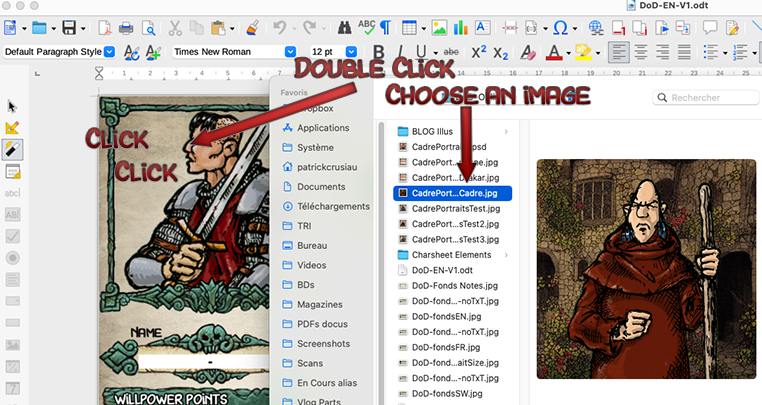 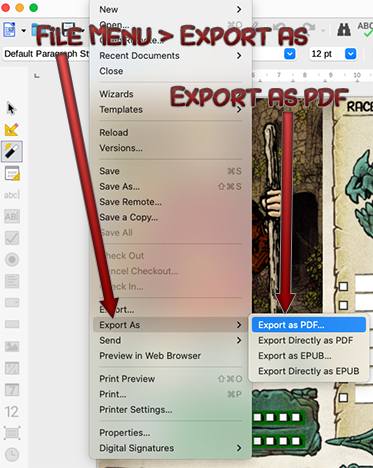 In the PDF option window that opens itself, verify that the button "Create PDF Form" is checked. 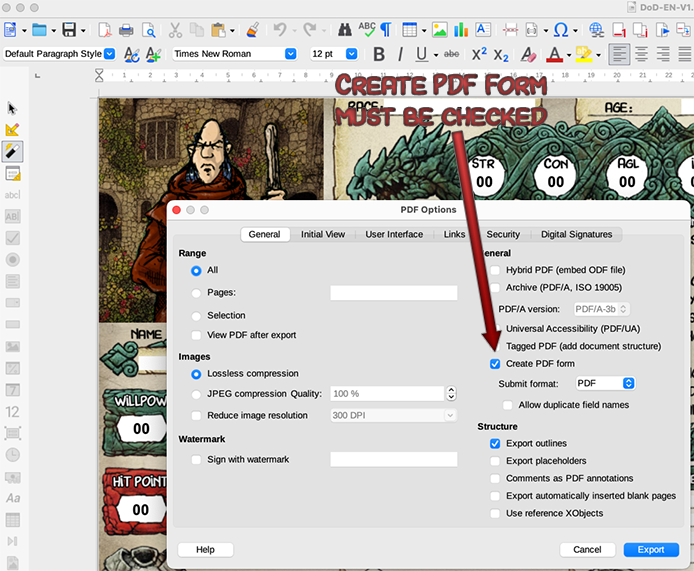 And that's it. If you open the pdf form in a tab alongside your VTT page, you have a charsheet as accessible as those imbedded in other online VTTs.

3. Placing the character illustration into a frame with the same style as the Character Sheet 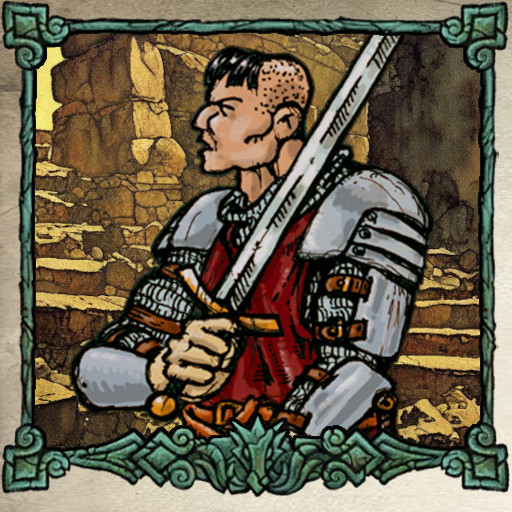 To do that, you'll have to open a PSD file containing the frame with GIMP or Photoshop and export the portrait from there. I'll show how to do it with GIMP, because I assume that if you pay a monthly fee for Photoshop, you already know how to use it (and the steps are the same anyway). 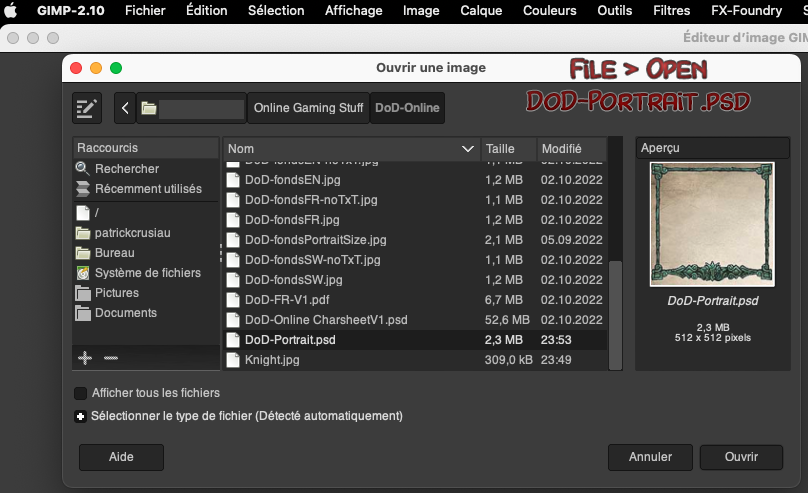 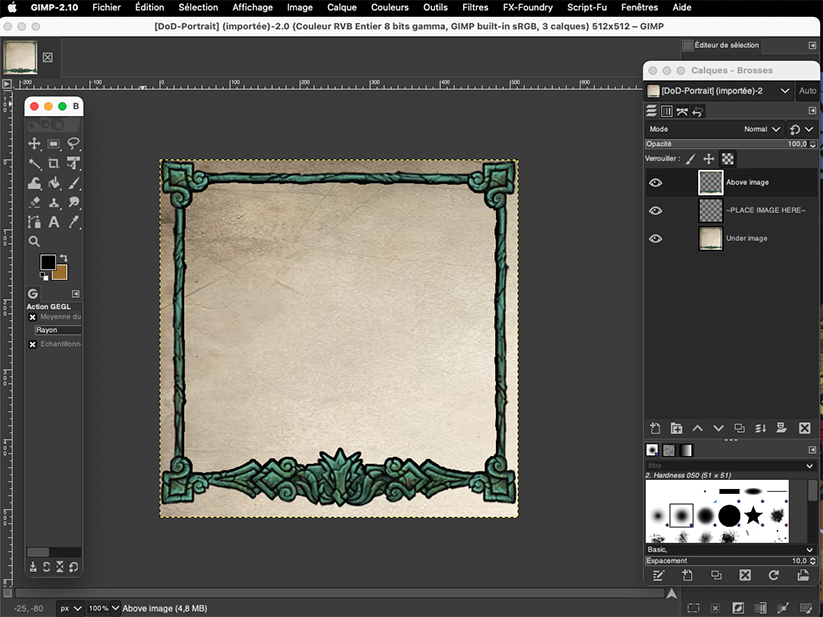 Step 2: Open the image of your character and select/copy it
File > Open
Select > All
Copy Step 3: Go to DoD-Portrait window that you have already opened, select the -Place Image Here- layer and paste.

You can resize and/or move the image of the character within the frame with the transformation tools:

Step 4: when you are satisfied with the result, just export as a jpg (to export as a jpg, you have to manually write the jpg extension in the name of the exported file). 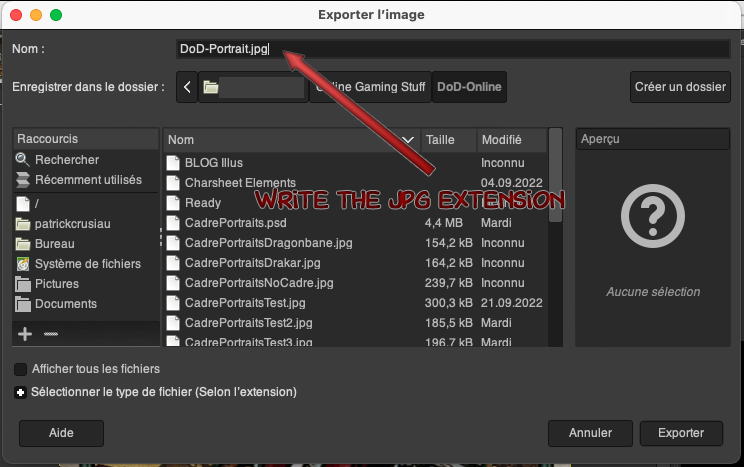 And that's all, you can place this image into your character sheet as we have seen before.
PSD PORTRAIT FILE
I hope you'll find those files useful. Let me know if there is anything wrong or unclear.
Happy gaming.
Posted by Bhoritz at 15:42